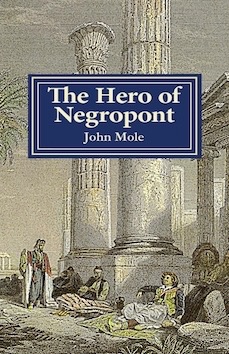 Tales of Travellers, Turks, Greeks
and a camel

'Readers are in for a treat' - ARGO, journal of the Hellenic Society, London
A travel book, a comedy, a history, a fiction.

Between Ancient Greece and Modern Greece were four centuries of Ottoman Greece. Join Lord Exford on his grand tour of the characters our travellers encounter.

To escape debt and summonses, rakish Exford is exiled in 1788 to Constantinople with a prudish tutor and a truculent artist. They are shipwrecked on a Greek island ruled by a tyrannical Turkish pasha and populated with stories of passion and delusion. Star-crossed lovers, renegades and minstrels, pirates and djinn are just some of the characters our travellers encounter. They also meet Amelia Burbage, a botanist, feminist and intrepid explorer, with her Syrian servant and an irascible camel.

Befuddled by love, hashish and his classical education, Exford's tutor takes on the might of the Sultan and it is left to the wily Exford to deliver his eccentric band from an unspeakable fate.

The Clash of Civilisations, East and West, Christian and Muslim, has been with us since the Turks besieged Vienna nearly five hundred years ago. In The Hero of Negropont Ottoman meets Georgian. The adventures of the reluctant Grand Tourists owe less to Homer than Drury Lane and the brand new musical comedy of the time.