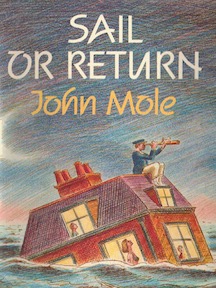 This is a book with much original humour, a highly accomplished farce with plenty of sharply observed social detail and a fast-moving narrative pace to match its tight plotting.
The Times Literary Supplement

This is a very funny first novel about the folly of trying to realise one's dreams. A witty, extremely entertaining read.'
Woman's Journal.
Pax Brown should be a happy man. He has a loving wife, two wonderful children, a nice little town house and a steady job in a bank. But while he tries to stem the rising tide of spilt peas and Lego and Thea cooks Sunday lunch in her underwear and green wellies, they both dream of a more fulfilling way of life. Jogging and high fibre is not the answer.

Thea's aims are practical. She wants a new house and a job as a social worker. Pax wants to get out of his job before he is smothered by boredom and his doting PA the unlovely Doreen, the only one who knows what a time waster he is. He dreams of adventure and excitement and the little things of life that are passing him by, like a yacht and plenty of money.

Their marriage is rocked when Pax falls in love. The object of his desire is the Swan, a beautiful but down-at-heel wooden boat moored in the marina ten minutes walk from his office. Suddenly he is Master of the Swan, Thea has thrown him out of the bedroom and his brother-in-law's dazzling girlfriend has enticed him to sail too close to the wind in search of hidden treasure.

Everyone has his daydreams. Some of us, like Pax Brown, try to live up to them. The outcome is hilarious and a new comic hero is born.
Read the first chapter