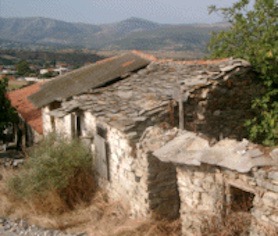 We fell in love with Greece decades ago. Like many love affairs it started with lunch – baby squid, suckling pig, fried aubergine, Greek salad and lemony, tart retsina – delicious things, exotic and full of sensual promise. So when I was offered a job based in Greece, we jumped at the chance.

That was more than twenty-five years ago. The currency was the drachma and somehow we lived without mobile phones and laptops and the internet. Greece was rebuilding after seven dark years of dictatorship and applying to join the European Union.

We lived in an olive grove on the outskirts of Athens. An ancient tree grew up through the middle of our balcony. From the kitchen sink we looked out on the mountains of Parnis, from the bathroom sink the mountains of Pendeli. Quinces and medlars grew outside the front door, bitter oranges for marmalade at the back. In season we gathered figs, apricots and grapes. We woke up to thrushes and fell asleep to nightingales. It was sunny most days of the year and wine was cheaper than water. It was a far cry from South London where we lived before.

'Oh Toad, I dread the thought of leaving here,' said Arfa once a week. The only consolation I could offer was Ti na kanoume? – what can we do? – an essential Greek phrase in the face of life's inevitabilities.

Arfa is not my wife's given name. It is short for 'just 'alf a glass', which is what she says when offered wine. The impression of moderation is undermined by having to fill her glass twice as often. My nickname, Toad, is short for Fat Slimy Toad, an endearment from our courtship. We have four children, Jack, Jim, Kate and Harry, who were then under ten years old.

Our transfer from Greece was imminent, probably to Frankfurt or Pittsburgh. We talked of staying on or at least owning a place we could come back to. Our dream was a little whitewashed house with a blue door and blue shutters on an unspoiled island in a picturesque village next to the beach with a taverna round the corner. So how did we end up with a tumbledown ruin on a hillside above a village called Horio, with no road, no water, no electricity, no roof, no floor, no doors, no windows and twenty years of goat dung?