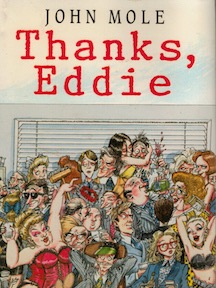 A witty satire on City life, which will be gruesomely familiar to all those who work within the Square Mile.
The Times

Most enjoyable...good on office atmosphere, City jargon, slap and tickle.
The Guardian

No-one knows more about the workings of Dividend Investments than Eddie Fly. He reads all the memos, all the telexes. He hears all the most important telephone calls. He knows all the staff, and all their little weaknesses. His grapevine in the City keeps him informed of all the latest developments in the world of business and finance. But no, he isn't the Chief Executive. Eddie Fly is the head messenger, the life and soul of the company.

When the general manager of Dividend Investments dies in the arms of his secretary, Norah, in the course of some after-hours recreation, and when Percy Wheeler, Dividend's boss, decides to put a woman in his place, Eddie's carefully-managed world seems to be running out of control. And has someone been up to some mysterious dealings on the side?

There will be much hilarious confusion, and many disasters, before Eddie's multifarious talents can restore order to the little world of Dividend Investments, a world that anyone who has ever worked in a company will instantly recognize.